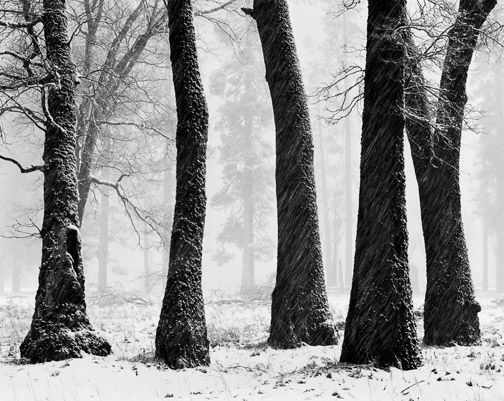 John Sexton was born in 1953, and has lived on the Monterey Peninsula in California for more than thirty years. Respected as a photographer, master printmaker, author, and workshop instructor, he is best known for his luminous, quiet, black and white photographs of the natural environment.

John’s most recent book is Recollections: Three Decades of Photographs, an award-winning retrospective volume, published in late 2006 by Ventana Editions. John’s previous award-winning books include Quiet Light, a monograph representing fifteen years of his work, and Listen to the Trees, which were published by Bulfinch Press/Little, Brown and Company, along with Places of Power: The Aesthetics of Technology published by Ventana Editions.

He is Director of the John Sexton Photography Workshops program, and teaches numerous photography workshops each year for other programs in the United States and abroad, emphasizing printing technique and mastery of the Zone System. Some of these other programs include: Anderson Ranch Arts Center, The Ansel Adams Gallery, Maine Photographic Workshops, and The Palm Beach Workshops.

His informed and entertaining lectures for photographic and professional organizations, colleges and universities, and museums discuss the aesthetic and technical aspects of fine black and white photography. He has presented lectures for, among others, George Eastman House, Center for Creative Photography at the University of Arizona,
Boston University, Los Angeles County Museum of Art, Museum of Photographic Arts, and the Seattle Art Museum.

A recipient of the 2005 North American Nature Photography Association Lifetime Achievement Award, John is a consultant to Eastman Kodak Company and other photographic manufacturers. He worked as both Technical and Photographic Assistant, and then Technical Consultant, to Ansel Adams from 1979 to 1984. Following Mr. Adams’ death Sexton served as Photographic Special Projects Consultant to The Ansel Adams Publishing Rights Trust. From 1985 to 1993 he was a member of the Board of Trustees of The Friends of Photography.