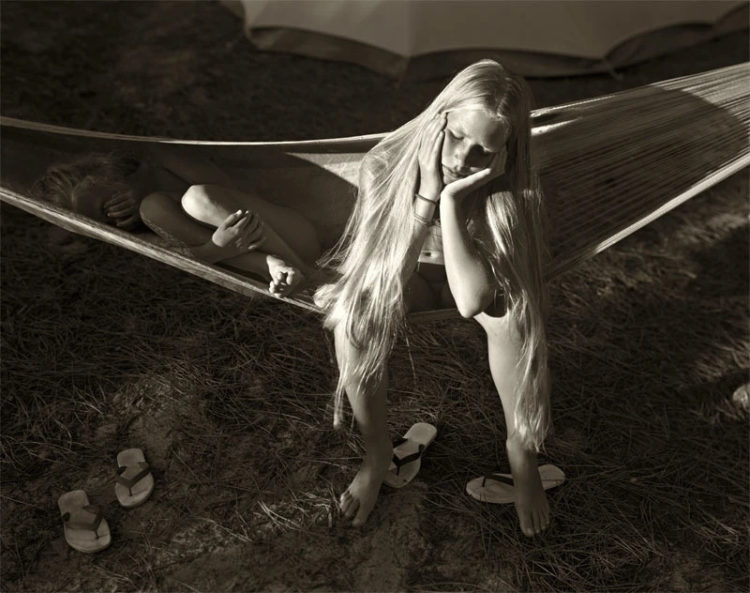 Jock Sturges (American, b.1947) is best known for his intimate, arresting photographs, often of nude adolescent girls erotically posed in nature. Born in New York City, Sturges studied at Marlboro College in Vermont, and later received an MFA from the San Francisco Art Institute. In his luminous, detailed photographs, Sturges captures images of young women and their families at nude beaches in France and California. His photographs portray his subjects with a self-awareness of their developing adult identity and sexuality. Sturges makes it a point, however, to stress the trusting, personal relationship between himself, his subject, and his subject’s family as essential to his work.

He has photographed some subjects over a series of decades, tracing their growth into adults, as well as created images of families spanning several generations. Sturges has attracted a significant amount of controversy over his works, which some deem as crossing a boundary in using children in his erotic imagery, but he continually receives public support against such criticisms. Sturges has published several books of his photographs, and his work is in the collections of the Phildelphia Museum of Art, the International Center of Photography and the Metropolitan Museum of Art in New York, the Denver Museum of Art, the Musée de l’Elysée in Lausanne, Switzerland, the Museum Ludwig in Berlin, and the Musée de la Louvière in Brussels. He currently resides in Seattle, WA.